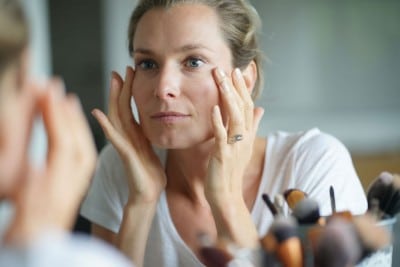 Having Obstructive Sleep Apnea (OSA) or other sleep-disordered breathing (SDB) conditions may speed up aging, especially among women.  As we know, OSA occurs when a person’s airway is obstructed by the collapse of soft tissue in the throat, leading to the gasping and/or snoring sound.   OSA is the most common form of SDB, which is characterized by abnormal breathing during sleep that commonly results in repeated nightly reductions in blood oxygen saturation.

Both BMI (body mass index) and age are significant risk factors of sleep apnea.  Other variables associated with aging must be taken into consideration, including health behaviors and sociodemographic factors.  The relationship between age and BMI closely resembles the relationship between age and sleep apnea, demonstrating that BMI can confuse the age/sleep apnea relationship.
Sleep disorders are also found to be associated with accelerated epigenetic aging.  Epigenetic age is an estimate of biological age, based on changes in DNA at various locations throughout the genetic material.  Recent research suggests that like chronological age and environmental and physiologic risk factors such as smoking and heart disease, epigenetic age can predict life expectancy.  Prolonged disruptions in blood oxygen levels and sleep fragmentation can generate stem cell exhaustion, epigenetic changes, increased inflammation, and other hallmarks of aging.
Studies have shown that the higher the AHI (apnea-hypopnea index), the greater the age acceleration that will occur.

We already know that untreated OSA leads to memory loss, concentration issues, daytime fatigue, and headaches, among multiple other medical problems.  New evidence also suggests that untreated sleep disorders can be related to Alzheimer’s, Parkinson’s, dementia and type 2 diabetes.  Patients with OSA also have a higher prevalence of cardiovascular disease.
Depending on our anatomy, our risk of sleep disorders can increase due to situations like the structure of our jaw, nose and throat.  Loss of muscle tone also plays a role in this.  With menopause, women become automatically more susceptible to developing a sleep disorder.  Estrogen levels decline, therefore the muscle tone of the airway declines.  Estrogen deficiency after menopause also causes other physiologic changes in a woman’s body which can have severe consequences on quality of life, the most serious being increased risk for cardiovascular disease (the #1 cause of death in the menopausal age group).
Also, the majority of postmenopausal women experience a reduction in blood pressure.  SDB is a risk factor for hypertension, so it is possible that the reduction of cardiovascular mortality rates in postmenopausal women could be related to the reduction of SDB in this demographic.

As we age, it is extremely important to make sure we get enough sleep.  Even one night of sleep deprivation causes cells to age faster than usual (especially in older adults).  Sleep is restorative for your body and your brain, and there are health consequences in both he short and long term.  During the deeper phases of sleep, chemicals like insulin and glucose are regulated within your body.  Depriving your body of sleep and access to those deep phases prohibits your body from distributing what it needs to.  As a result, cells and organs miss out on replenishment, renewal, and redistribution.
Consistent nights of healthy sleep are very important. A lot happens during this vital time of growth and renewal:

Structural changes in the brain and memory function are fairly normal for the older age demographic, as are some sleep disorders.  However, changes in brain structure are accelerated at a higher rate for every hour of sleep that is lost on a nightly basis.
Many of the symptoms we may associate with someone who is getting older may be linked to sleep apnea.  Consider the following examples:
-Snoring
-Waking to urinate(nocturia)
-Daytime sleepiness
-Naps or dozing
-Insomnia
-Fragmented sleep
-Early morning awakenings
-Heartburn at night
-Palpitations
–Teeth grinding (bruxism)
-Mood problems (anxiety, depression, and irritability)
-Cognitive complaints (short-term memory, concentration, and attention)