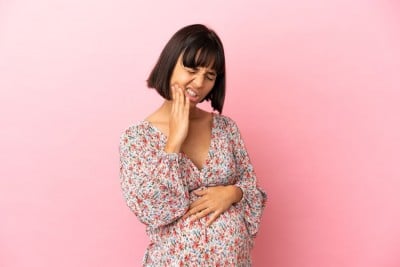 In my practice over the years I have treated countless pregnant women and have documented the symptoms and dysfunctions associated with TMD before, during and after pregnancy.  One patient in particular that I remember had multiple pain symptoms, but went through 3 pregnancies, during which time the pain subsided.  It was not until after her 3rd pregnancy that she started treatment because all of her initial pain returned. This relationship between TMD and pregnancy has been exemplified multiple times and is an interesting part of TMD issues in women.

Studies have shown that the prevalence of TMD in pregnant women is three times less than non-pregnant women.  The pain threshold is much higher during pregnancy.  Symptoms seem to disappear with the onset of pregnancy and reappear post-partum.  This cycle is reflective of the sudden withdrawal of additional estrogen.

The Science Behind TMD and Pregnancy

TMJ tissues contain cells with estrogen receptors – particularly the condyle, disc and joint capsule – as well as muscles of mastication. Estrogen has a great influence on the cartilage and also causes antiresorption on the bones.  Additionally, estrogen reduces pain, or at least the perception of pain, during pregnancy due to an increase of collagen (type 3). Collagen type 3 is associated with Ehlers-Danlos syndrome (prevalent in some TMD patients), which can make joints overly flexible. As a result, orofacial pain and musculoskeletal symptoms “go away” during pregnancy.