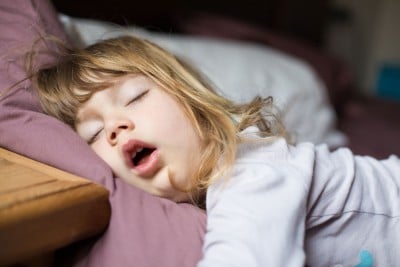 While most of my discussions involve Obstructive Sleep Apnea (OSA) in adults, today I will be talking about OSA in children.  Childhood OSA is a common, often undiagnosed, disorder that 1 in 4 children suffer from. While the severity may differ, literature suggests that only 1% – 4% of children are diagnosed with OSA.
For the first 6 months of life, an infant is an obligate nose breather as a result of contact between the epiglottis and soft palate at birth.  Contact between the epiglottis and the soft palate at birth provides a channel from the nose to the lungs.
External nares –> nasal cavities –> nasal pharynx –> larynx –> trachea –> lungs
Food passes on either side of the interlocked larynx into the esophagus without interfering with the airway.  Then at approximately 18 months old, the laryngeal complex migrates from its original subcranial position to lie opposite the 5th cervical vertebra, eliminating the interdigitation between the soft palate and epiglottis and developing an oropharynx. The oropharynx is the part of the throat just behind the mouth. It includes the back of the tongue, the soft palate, the tonsils, and the side and back wall of the throat.

The peak age for OSA in children is between 2-8 years old.  The tonsils are very large compared to the airway size at this age. In a newborn, the cranium is 8 to 9 times larger than the facial portion.  This relationship is changed by differential growth to the extent that the adult face is about 50% of the size of the cranium. Airway obstruction can affect facial growth.  By age 4, the craniofacial bones are at 60% of their adult size. By the age of 12 the cranium is 90% of the adult size.

The Importance of Identifying OSA in Children

OSA or sleep disordered breathing can affect the craniofacial structure, thus it is important to detect OSA in children earlier rather than later.

Diagnostic records include a PSG study, in which the AHI (apnea hypopnea index) recorded must be greater than 1/hour (AASM guidelines).  If more than 10 episodes occur per night, then this level of OSA is considered severe in a child.  The point is that all children should be screened for snoring and OSA, including not only the PSG, but also a thorough History & Exam.
The American Academy of Pediatrics (AAP) Clinical Practice Guidelines state that all children should be screened for snoring and recommended PSG as the gold standard for diagnosis of OSA because patient history and physical examination are poor discriminators of primary snoring and OSAS.
There are multiple treatments for OSA in children, including palatal expansion with an orthodontic appliance, tonsillectomy, adenoidectomy, correction of a deviated septum, etc. This article will focus on tonsillectomies is children.
Tonsillectomy is one of the most common surgeries performed in the United States.  While it was popular during the 1950’s – 1960’s for sore throats, today these procedures are more focused on alleviating symptoms and dysfunctions associated with OSA.  Enlarged tonsils block the airway, causing impaired sleep.

During these periods of sleep, it may appear that the child is trying to breathe because the chest is moving, but no air is actually being exchanged through the lungs.  This results in an interrupted sleep cycle, with routine awakenings.

Tonsillectomy remains a top treatment choice for children because of the success rate – much higher than adults.  By removing the tonsils at an early age, the chance of developing OSA as an adult is greatly reduced.
In 2006, there were 530,000 tonsillectomies performed in children younger than 15 years old.
Children who have the surgery achieve better quality of life overall, less anxiety and depression, less chance of developing ADHD, fewer mood swings, less chance for negative behavior, and improved overall cognitive function. The procedure should be performed as early as possible/detected to prevent complications (metabolic, cardiovascular, neurologic, endocrine).  It has been documented, however, that children under 3 years old have had more postoperative complications than those older than 3, but again it depends on the severity of the case.
Typically, a tonsillectomy is an outpatient procedure, performed by an ENT (ear, nose and throat specialist).  Depending on the case, it is possible that the tonsillectomy will not eliminate the OSA.  Sometimes there are comorbidities that are present, including obesity, neuromuscular diseases, severe bleeding or craniofacial abnormalities.  If so, then CPAP therapy may be recommended for the more moderate to severe cases of OSA.
The CPAP remains the gold standard for treatment of OSA, however compliance for children can be an issue.  The CPAP can cause different side effects, which sometimes become unbearable to children.  These include nasal congestion, dryness, skin irritation, rash, sores, excess mucus (rhinorrhea) and in some cases, facial hypoplasia (facial distortions).   In order to make the CPAP more appealing to children, several companies have started making “kid-friendly” designs like the pictures below:
For more information on OSA in children and/or questions regarding tonsillectomies, please contact our office at (586) 573-0438.
References
Sheldon SH, Ferber R, Kryger MH. Principles and practice of Pediatric sleep medicine. 1st ed. Philadelphia: Elsevier Saunders Co; 2005. pp. 197–267.
Ahn, YM. Treatment of obstructive sleep apnea in children. Korean Journal of Pediatrics. 2010;53(10).
Clinical practice guideline: diagnosis and management of childhood obstructive sleep apnea syndrome.Section on Pediatric Pulmonology, Subcommittee on Obstructive Sleep Apnea Syndrome. American Academy of Pediatrics. Pediatrics. 2002 Apr; 109(4):704-12.
Brigance JS, Mitamoto C, Schilt P, Houston D, Wiebke JL, Govan D. Surgical management of obstructive sleep apnea in infants and young children. Otolaryngol Head Neck Surg. 2009;140:912–916.
Barsh, LI. The Origin of Pharyngeal Obstruction During Sleep: Sleep and Breathing, 1999, 3:17-2.
Kids’ Tonsillectomies Make More Sense For Sleep Apnea Than Strep Throat
Published on January 19, 2017; http://www.sleepreviewmag.com/2017/01/kids-tonsillectomies-make-sense-sleep-apnea-strep-throat/
www.kidshealth.org
www.medlineplus.gov