The Buzz on Tinnitus 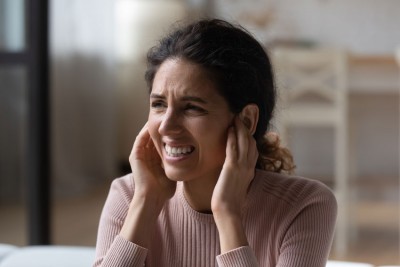 Have you ever experienced ringing or buzzing in ears that only you can hear? This perception of sound, tinnitus, can manifest itself in many different ways. According to the CDC, tinnitus affects nearly 15% of the American population.

One cause of tinnitus is an underlying TMJ disorder (TMD). TMD is often called “The Great Impostor” because its symptoms can mimic those of many other conditions. Until recently these symptoms, appearing unrelated, were undiagnosed or misdiagnosed as migraine, tension headache, neuritis, neuralgia, or stress. When standard treatment remedies for these types of disorders proved unsuccessful, patients were labeled as hypochondriacs or neurotic.
A classic example of “The Great Impostor” is TMD causing otalgia (ear pain) in the guise of an ear infection. These patients often exhibit no clinical signs of primary ear pathology, yet they may have ear pain that persists even after an ear infection has been successfully treated. Historically, TMD has been closely linked with Otolaryngology. One of the earliest credible studies describing TMD was published in 1934 by an Otolaryngologist, James B. Costen. He established TMD as a differential diagnosis to be considered when otalgia is present. Today, it is well recognized by certain practitioners within the Health Care Community that these often unexplained, undiagnosed and therefore untreated symptoms are related to a group of problems called Temporomandibular Disorders (TMD). Many Ear, Nose & Throat (ENT) specialists are screening for TMD during consultation appointments today.

Keep in mind that the chewing muscles are near to some of the muscles that insert into the middle ear and so may have an effect on hearing. This can either promote or exacerbate pre-existing tinnitus. Secondly, there can be a direct connection between the ligaments that attach to the jaw and one of the hearing bones that sits in the middle ear. Lastly, the nerve supply from the TMJ has been shown to have connections with the parts of the brain that are involved with both hearing and the interpretation of sound.

Many patients with temporomandibular disorder and coexisting tinnitus find that therapy improves or resolves their tinnitus in conjunction with their TMD symptoms. Asking targeted questions and performing clinical testing can be of significant value in helping practitioners identify which patients with TMD and coexisting tinnitus will experience improvement in, or resolution of, their tinnitus when TMD symptoms have improved significantly.
If you are experiencing tinnitus and it is related to your TMJ, then you might have other symptoms like any of the following:
• head, back and neck and pain
• dizzy spells
• ear pain
• ear infections
• ear congestion
• loss of hearing
• stuffed up ears
• sinus pain
• sore throat
• migraines and headache
• blurred vision
If your bite is not aligned properly, the trigeminal nerve can cause tinnitus and earache. It’s not actually an ear infection, but just an irritation that is caused by the activity in your trigeminal nerve.

One of these muscles goes to the eardrum and is called the Tensor Tympani. It can create the tone of noise by stretching the ear drum similar to changing the tone of a guitar by tightening the strings. The other muscle is a jaw muscle but they used to be a single muscle (Medial Pterygoid and Tensor Tympani) early in our development. They share the same trigeminal nerve connections.

While most have mild symptoms, ringing in the ears is a common condition that patients often don’t tell their doctors about. In a 2007 National Health Interview Survey (raw sample – 75,764 respondents), of those who experienced tinnitus, only about half had discussed their problem with a physician (49.4%).
In addition, individuals with tinnitus often have higher rates of depression, anxiety, low self-esteem and poor quality of life. Bothersome tinnitus can lead to sleep disturbances as well, which only worsens the mental stress and anxiety. This can eventually lead to disability.
If you, or someone you know, is experiencing any combination of even a few of the symptoms listed above, please talk to your doctor about a possible TMJ problem or call us today.

While some surgeries are available for different TMJ dysfunctions, Dr. Klein takes a conservative approach to treating the condition that even most surgeons prefer to be the first course of action. Some of the treatments offered at Michigan Head & Neck Institute include:
• Wearing a corrective orthotic (mouthpiece) which can be adjusted as needed for each patient
• Physical therapy which can include tens unit usage, physical massaging of the area around the TMJ joints and heat applications
• Helpful guidance toward helping each patient understand their condition, and how to avoid harmful daily habits that might worsen their condition
• Pain-relieving injections, and other non-invasive options